In the last post, we looked at bilingual trends in Western Canada.  Now let’s have a look at what is happening in Ontario.

At a government level, Ontario is one of the provinces which has made some of the most pro-active efforts towards bilingualism.   Whereas the Yukon as a territory, and New Brunswick as a province are constitutionally mandated to provide bilingual administration, the other provinces do not have the same legal requirements – although all provinces and territories provide some level of bilingual services (Manitoba’s constitutional mandate to provide French services as part of all government services is a question currently being debated – specifically the legality regarding the law Manitoba passed in 1890 which withdrew province-wide bilingual services).

Ontario had no constitutional obligations to become a bilingual province.  Yet, because Ontario has roughly the same number of Francophones as Québec has Anglophones, Ontario has chosen, of its own accord, to declare huge swaths of the province legally bilingual, and to offer one of the better resourced French Immersion programs and French language University access to Anglophones in all of Canada.

There are still some contentious issues for Francophones in Ontario (the expansion of health-care services, declaring Ottawa a legally mandated bilingual city, and the need for a Francophone university in Southern Ontario, amongst others) – but as far as “bilingual” affairs are concerned with which to build a functionally bilingual population (which is different than “Francophone” affairs), Ontario gets a good number of stars in my book for its past work.

The system may not be perfect, but Ontario has laid the groundwork and infrastructure to allow for the ability to build a much better system, and achieve even greater results over the coming years and decades.   The rest now comes down to continued political willpower in the face of massive amounts of international immigration (some of the highest rates in the developed world).

The map below shows the current state of affairs for offering bilingual services in Ontario.  There’s mixed reaction on how well this works in practice – in some regions it works extremely well and services are very good.  In others regions, work is still needed despite official designation.  But the infrastructure groundwork is at least in place from which to build upon.   Click to enlarge.

This next map shows the province as a whole, divided along regions for analysis.  Click to enlarge. 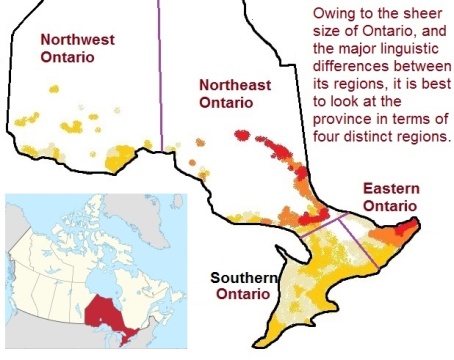 Northeast Ontario has the highest concentrations of Francophones (with many towns being from 80% to 90% Francophone – one of the most Francophone regions in Canada – and linguistically, it operates almost as a separate province (especially along Highway 11).  It is in this region that people are the most bilingual.  It is also in this region that we find the highest concentration, and amongst the most readily available bilingual services in Ontario.   Click map to enlarge.

The Southern portion of the province (map below) is often referred to in terms of Southern Ontario and Eastern Ontario.  There is a stark demographic difference between the two regions when it comes to bilingualism.

In Eastern Ontario, there are businesses and organizations which operate to a large degree in French, and which and hire bilingual Anglophones as employees.  Here, we also find some of Ontario’s more readily available services in French.

The Southern Ontario portion comprises the Golden Horseshoe region, the Niagara Region (which abuts against Buffalo, New York), and Southwest Ontario (where Windsor abuts against Southern Michigan and Detroit).

In absolute numbers, because Toronto’s Greater Toronto Area / Golden Horseshoe comprise over 10 million people, some of the highest “absolute” numbers of bilingual people in Canada can be found in this region.  But as a proportion of such a large population base, the overall percentage is not much greater than other large cities in Canada.

There is a growing movement to put pressure on the provincial government of Ontario to fund and open a fully independent French language university in Southern Ontario for Francophones and Anglophones alike (much along the same model as English minority language universities such as McGill or Concordia in Montréal).

Currently, Francophones and Anglophones who wish to pursue post-secondary education in French have to attend a mixed French/English university (such as University of Ottawa, Collège Boréal, Université de Sudbury, York University, Laurentian University, or University of Guelph).

According to Statistics Canada:

But analysts say this has more to do with the massive annual overseas immigration rates into to the Toronto region, than what it has to do with a regression in bilingual promotion in Ontario as a whole (keep in mind that two million people in the Toronto area speak a language at home other than English or French, and thus the language-learning focus for these people is concentrated on English).

YET, if you were to take Toronto out of the equation, the situation looks much better elsewhere in Ontario, and bilingualism is on the upswing.

Most experts I’ve heard talk about the issue believe that over the coming decades, as the children of current first generation immigrants in Toronto go through the education system, the absolute and proportional bilingual numbers will begin to increase again (just as it does in the rest of Ontario and Canada).

The Toronto/Horseshoe area alone receives about 250,000 newcomers every year – a combination of 100,000 immigrants from overseas and over 100,000 migrants from elsewhere in Canada (perhaps upwards of 300,000 if you consider temporary students and temporary transfers).

The Toronto region is now more populous than Chicago — and in terms of any city north of Mexico, Toronto is now the third largest city after New York and Los Angeles.

Thus, when it comes to anything related to demographics in Ontario, what happens in Toronto greatly skews any numbers for the rest of the Ontario (and with more than 1/4 of the entire population of Canada, the Greater Toronto / Golden Horseshoe area also skews the numbers for the rest of the country too).  How can it not?  There’s a reason why Toronto has more international flights than any other city in the Western Hemisphere, after New York City.

In the same vein, Vancouver also faces similar challenges with respect to bilingualism and also skews B.C.’s numbers (and to a lesser extent, Canada’s overall numbers), just as Calgary’s very high immigration rates also skew bilingual numbers for Alberta (Calgary last year surpassed Montréal as having the 3rd busiest airport in Canada – with direct flights as far away as Japan and soon to have a new direct flight to Beijing).

But in terms of Toronto, it’s simply the “Toronto effect” — It’s not bad… it’s just, well… different… very very different (but hey… I still think Toronto is an amazing place!) 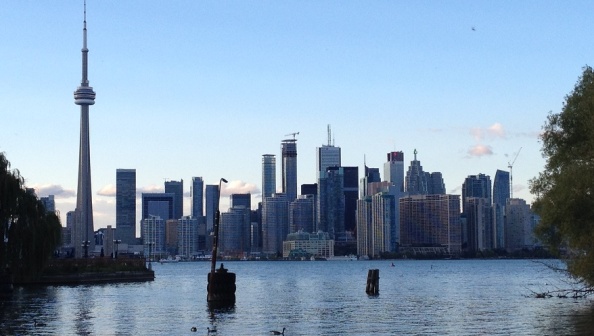