Bilingualism in the Atlantic Provinces (#71) 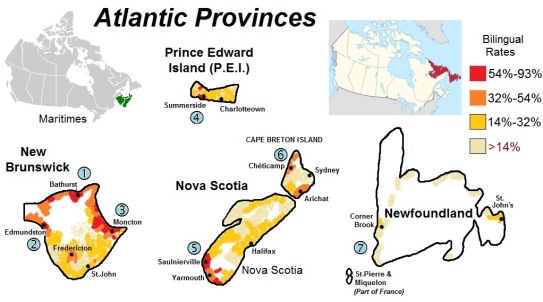 This is the 4th post in a series on Bilingualism trends and context in Canada.  The Maritime provinces (NB, PEI and NS) are home to Acadia – one of the strongest Francophone societies in Canada, as well as one of the oldest bastions of French in North America.  France’s Port-Royal, in today’s Nova Scotia, was founded in 1605, three years before the founding of Québec City – and the area has been continuously populated ever since (previous attempts of permanently populating any other areas with European settlers all failed).    It is in Port-Royal that Acadia finds its roots, and in many ways, Port-Royal and the buildings below is where the notion of new-world Canada began… for all of us (photo below). 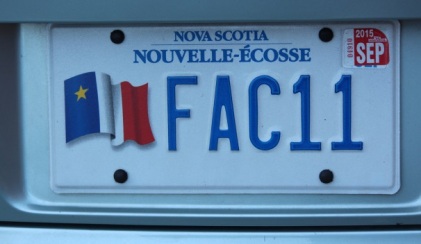 In Nova Scotia, bilingualism rates are highest in predominantly Francophone Acadian regions.   This would include the Saulnierville region, south of Port-Royal (32% – 54% bilingualism), as well as Francophone regions of Cape Breton, such as Chéticamp and Arichat.  Cape Breton has strong Acadian history – with Louisbourg being at the core of its history.

In absolute numbers (rather than proportional numbers), the largest numbers of bilingual Nova Scotians would likely be found in the greater Halifax area, Atlantic Canada’s largest city, and Canada’s largest Atlantic Ocean port.

According to Statistics Canada:

Although Acadia’s original roots stem from present day Nova Scotia, it’s in New Brunswick where Acadian culture’s magnetic centre is found.   New Brunswick is almost a tale of two provinces;  Francophone in the North, and Anglophone in the South.   But the province constitutionally became officially bilingual over 30 years ago, and bilingualism among Anglophones has been on the increase – helping to narrow the tale of two provinces.  Fredericton, the capital – historically a unilingual Anglophone city – now has a vibrant bilingual community.  Anglophones have comprehensive access to education in French, both at elementary and secondary levels, as well as at University (Université de Moncton is a Francophone university which Anglophones also attend).

With over a third of the province being Francophone, bilingualism is strongest in Francophone cities such as Edmundston, Bathurst, and Moncton (the largest Francophone city in Atlantic Canada).

PEI is Canada’s smallest province, both in terms of size and population.   Most bilingual people are found in the West of the island.

When people think of Acadia, for some reason PEI doesn’t come to mind as readily as Nouveau-Brunswick or Nouvelle-Écosse.   But PEI does have a proud Acadian history, albeit with a smaller Acadian population (around 11,000).   PEI used to be known as Ile-St-Jean.

I’ve been fortunate to have heard some of the last speakers of Newfoundland’s unique style of French – a couple of Francophones who moved to Alberta from Newfoundland for work.  You can recognize the “original” Newfoundland French by it’s unique grammer, expressions, and its unique use of the conjugation “-ions” in the first and second person (rather than reserving it for only “nous”, as in standard French).  Example:  “J’étions cuisiner la pêche” (I was cooking up the fish we caught.), “Tu venions par la’citte hier.” (You came here yesterday).   Unfortunately, I’m not sure how much longer this special style of French will continue to last – speakers of the pure Newfoundland French must now be few in numbers.  Younger Francophones are leaving the small villages for work, and the French language that remains in Newfoundland is generally standardizing in line with the likes of international and Acadian French.

However, all is not lost.  Newfoundland’s bilingualism rate has grown slowly.  It has gone from a province in which almost no Anglophones could speak French a few decades ago, to around 5% today.  Owing to the fact that its Francophone community remains very small compared to other regions of the country, the increase in bilingualism is likely a direct result of Anglophones becoming more bilingual through immersion and intensive French programs, rather than through an increase in bilingual Francophones.  The highest rates of bilingualism are around the capital, St. John’s, in Corner Brook, and in the Stephenville region.