I have have it in the back of my mind for quite some time to write a post on Denise Bombardier.  But I’ve been at a loss on how to describe her.   In a nutshell, she’s complex because of her varied interests and varied background.  Yet everyone seems to know and understand her in a simple kind of way.  They know who she is as a person and what can be expected from her.   In that sense, I can probably capture who she is in a few paragraphs if I just shoot from the hip.

She is in her mid-70’s, but has the energy of someone in their mid 30s.  She has had a 40 year career in the public light and media – with much of her career as a current affairs, societal, and commentary talk-show host.  Year after year she has published books on societal topics from A to Z, and she remains a high-profile columnist.

Through her publicly expressed opinions, she has become very influential in political circles by way of attracting public attention to various issues of societal concern.  She has never been a politician, but she is almost like the elder statesman/stateswoman who never was.

She does not shy away from controversial issues – which I suppose is her hallmark.  When she talks, people tune in and listen.

Bombardier has not hosted her own television talk show for a number of years, but that does not mean we see her any less (she does have a column in Le journal de Montréal… and considering the nature of the newspaper, I think it may have taken many by surprise – considering I and many other would probably have pegged her as a Le Devoir type of person).

Apart from being known for her strong views, she is also well known for publicly maintaining a “high-level” of French.  If you’re learning French (and many of the readers of this blog are learning French at a basic or elementary level), Mme. Bombardier may be someone who you would like to follow.   She speaks in standard Quebecois and International French, but she is known to incorporate an expanded and well-enunciated vocabulary into her speech — sometime with a more complex grammar (basically, she speaks “literary” French, which is the type of French Anglophones learn in school).   In this sense, she is to Francophone Canada what Conrad Black might be to Anglophone Canada when it comes to how she speaks.

Here is a video of an interview with Denise Bombardier (in French) made by program “Carte de visite” of TFO (Ontario’s public French-language broadcaster.  This is one of the better (and more enlightening) works I have seen on the subject of Denise Bombardier.

Denise Bombardier holds a Ph.D in sociology and a degree in political science.   In this context, she`s also an accomplished author on subjects as diverse as relationships, the role of French in society, societal morals, how society (especially Québec’s) should be viewed, and its current evolution.   Her views are strong, and very nationalistic.

She is particularly known for her on-air debates and exchange of opinions with some of the widest swaths of society, both influential figures, and experts alike.

One of the things which strikes me is just how much media attention she attracts, and the scale of her media presence.   It’s no exaggeration to say that she shows up everywhere.   In the span my entire life, whenever I have tuned into any francophone media, it would be rare to have not seen her, or to have not heard of her at least once every few days (a minimum of once a week).  It baffles me to think that someone can possibly be everywhere, all the time.  In this sense, I “grew up” with her in the background (like the family member who never was).

You could sometimes easily get the impression she is doing an interview in Montréal one morning, then seemingly attends a sit-down interview in Paris later that evening, an appearance the next day on a morning radio interview show in Québec City, then magically appears as an audience member at a gala awards event in Montréal the following day – I mean… seriously, holy crap!   It has been like this for as long as I can remember — and I’m in my late 30s..

She speaks her opinion and can be a passionate, emotional, and determined debater.   Only those who have very honed and strong debating skills seem to be able to hold their own against her.  However, her objectivity comes through in her ability to place her opinions it in the context of an overall opinion scale.

She’s very sure of herself and knows exactly where she stands with respect to others and societal issues.  But she has been known to vehemently shoot the arguments of others down if they can’t hold their own when they debate against her.  That’s perhaps why she attracts such a wide audience (of both like-minded people, and those with different views from her’s).  Tongue in cheek – If she were still a student at university, she would not be the head of the debating team, but rather she would be the head of the entire provincial debating association 😉 .

With that being said, I have seen many many instances where she holds an admirably cool-head, proving she knows there’s a proper time and place for debate, as well as a proper time and place for balanced, paced discussion (she has a keen sense of what others think, and she can objectively evaluate other’s opinions – before adding her own comments).

Unfortunately, I’ve never seen her appear in cross-Canada Anglophone media, which is a shame (a crime, really).  She could add a completely different perspective to many issues Anglophones would be interested in hearing about (many many issues which Francophones and Anglophones across Canada share and live with on a daily basis).  Interestingly, despite her assertive/aggressive debating style and nationalistic inclinations, I believe she would have the tact, and above all, the patience with which to wander through the murky waters of the Two Solitudes.

But it’s because of her accentuated criticism of all political stripes (she can be very critical of the sovereignist movement despite her own affirmations), that I would love to see her regularly appear in Anglophone media.   I assume she speaks English, but I don’t know for sure.   (Her husband is British, but I assume he speaks French owing to his professional background).

Her passion is for Quebec’s society.  She often relates her passion in the context of eras she grew up and worked in (although younger generations do know her, they may not follow her as much).  Because of her generational stance on many issues, I have heard her be referred to as a lightning rod for criticism (ie: she may view something one way, but younger generations may view in another light).

Nonetheless, she’s is granted a forum for debate because of the importance placed on her views and because she defends them so well.

Regardless if you do or do not agree with her views, I get the impression that her views are listened to, weighed and considered by those who are making decisions (administrators, elected government officials, organizations, the media, etc.).

If I could chose how best to describe Denise Bombardier’s public nature, they would be “pragmatic” and “a caring nationalist” (She is “pro-Québec, has traditionally been sovereignist, has always deeply cared for society’s welfare, and she does not become involved in the dirty side of politics which otherwise comes with these sorts of topics),  Her social opinions are very strong, and could be considered both progressive and conservative — depending on how you look at them (and depending on the issue being discussed).

There certainly are areas where I do not agree with her, but she has other many other views which I do agree with.  And then there are other instances which she simply makes me (and many others) think.  That’s why she gets my attention (and respect).  She helps to round out one’s views, and especially gives people a better awareness of where they personally stand on issues — regardless if their views are opposed or in line with Bombardier’s.   She strikes a chord – sometimes a sensitive one – but that’s her nature, and one of her numerous valued contributions to society.

Addendum 2014-11-28:. Yesterday I tuned into “C’est la vie” and found they did an interview with Denise Bombardier later in the same day as my post.  Her interview was given in English — a very interesting interview.  I’d encourage you to check it out on “C’est la vie’s” website.   http://www.cbc.ca/radio/cestlavie

Addenedum 2015-04-11:   A week ago I found out that Denise Bombardier would be signing her most recent book at the international book fair in Québec City.  I was grateful she took a few moments to chat and sign her book for me.  🙂 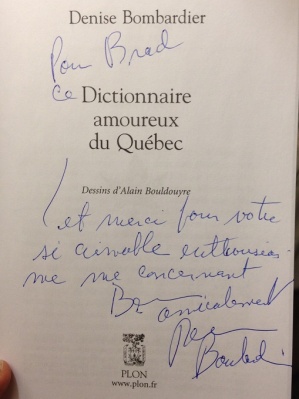