Here is a bit of humour for you.   I just saw these signs around the more Eastern areas of Montréal (the most Francophone areas of the city), however I have not seen them in more mixed areas of the city.  the likely reason is that the cultural significance of these signs would be easily recognized in the East End where people mostly grew up in French.  But they perhaps would not be so recognizable in areas of Montréal with larger anglophone or immigrant communities who have not necessarily grown up in French or perhaps have not lived in Québec for very long (this serves to highlight the demographics and cultural decisions which go into marketing, but which also contributes to the notion of the Two Solitudes).

The cultural reference behind the sign, and how it has been used in this context is hilarious!  I laughed out loud the moment I saw the first sign.  People around me must have thought I was a “few screws short” when they heard me laugh to myself.

Here is the sign.  See if you can understand the cultural subtext (if you have regularly been reading this blog, you may have clued into it).

Click the picture to expand it, because you’ll need to read the two larger words at the very bottom of the sign to understand the goal of the sign. 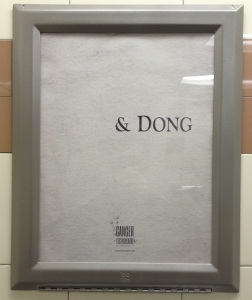 Did you get it?

I’ll give you a hint:   Several days ago, in another post, I made a reference to the same pop-cultural sub-context contained in this sign.    Here is a second hint:  A few months ago, I presented you with a link to video advertisement from the same charitable organization.

Still stumped?  I’ll give you the answer in tomorrow’s post.

And on unrelated language notes… Above I used a couple of slang expressions in English.

1.  If you’re wondering how someone might say “a few screws short” in Québec and Canadian French (the expression I used above), you can say a few things:

2.  If you’re wondering how to say “stumped” in French (a word I used above), you can say a couple of things.