I have finally found a format in which to write a post about hockey.

The “Québec Major Junior Hockey League” actually includes teams from not only Québec, but also the Atlantic provinces.

It’s tough to come by statistics which can show which of the above three leagues have the most die-hard fans.   But I have attended games in all three hockey regions of Canada, and I can anecdotally say that I have seen more sold-out games in the Québec Major Junior Hockey League, than the other two Canadian leagues.

As an aside:  Just to prove how seriously Québec takes its junior hockey teams, I took the following photo yesterday just outside of Montréal.  It is the bus for the AA Midget hockey league team of the Comètes d’Amos.  The AA Midget League is even lower than the Québec Major Junior Hockey League.  Yet, the team has its own bus with their logo on it (I don’t think many other regions outside of Québec has that sort of dedication for a league as low as the Midgets).  Amos is a city seven hour drive straight North of Montréal.

You have to realize that Québec is spread across a very large territory, with well demarcated regions.  There is a natural competition between Québec’s various regions (politically, economically, and with sports).

As in any society, people in rural or smaller regions tend to feel they’re in competition with their larger cities.  Québec’s sole NHL team is in Montréal, and thus it might be a natural reflex for smaller centres to rally hard around their local Major Junior Hockey teams.

The website Rankopedia conducted an unscientific poll, and the following teams ranked as Québec’s most preferred.

I tend to believe the poll is quite true for at least the four or five top teams.  I’ll give some of my own insight as to why.

Québec City takes their Remparts very seriously.  So seriously in fact that Québecor recently purchased the team with the goal of trying to bolster ticket sales in order to woo an NHL franchise back to Québec City.

Both of Québec City’s two major radio stations (Radio X CHOI FM and FM93) have daily talk shows which constantly talk up the Remparts.  The bleachers are constantly packed.

The fact that Québec City lost it’s NHL Franchise (the Nordiques) likely played a major role in bolstering the popularity of the Remparts.  The city’s NHL loss was a huge dent to the city’s pride.  Therefore it should be no surprise that the City’s energies and “target of redemption” have been focused squarely on the Remparts.

This used to be the team I most often watched (I used to live in Gatineau, and I would sometimes attend sold-out games with friends or colleagues).

There a couple reasons why I believe the Olympiques are Québec’s second most beloved team:

The team has become part of the cultural fabric of Gatineau, and people take their local hockey very seriously! 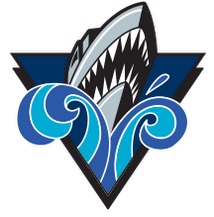 Eastern Québec has hockey running thick through their veins (perhaps much more so than Western Québec).   The further East you go, the more you feel you are in competition with the rest of the province on all levels.

Rimouski is one of the furthest teams in the East of the province.

Not only are the Océanic situated in die-hard hockey territory, but they are also a good team… very very good — the current League champions.

It’s no surprise the Océanic are in third place.

This team is the pride of Central Québec (the region between Montréal and Québec City).   Even though the region’s de facto capital is Trois-Rivières, T-R ended up losing its team almost 25 years ago.

Shawinigan has always been considered to be in the shadow of Trois-Rivières.  Thus, when T-R  lost its own team, Shawinigan’s hockey fans have taken their role very seriously in becoming the vanguards of the entire region’s pride and glory through their hockey team.

Hockey is as much a game of the psychology of public pride as much as it is a sport. The Cataractes embody this notion quite well.   Hence, they are Québec’s 4th most beloved Major Junior Hockey team.

It’s much more difficult for me to pin-down how and why the remaining Major Junior Hockey teams ranked in popularity.  Therefore, I will simply list them in remaining order.

I’m not surprised to see Val-d’Or in 5th or 6th position.  I have attended Val-d’Or matches, and the fans go crazy for their team.  Not to mention that people all across huge swaths of Northern Québec consider this to be their team and their voice in the province.

I would have thought the Chicoutimi Sagenéens would have ranked much higher (simply because the region has such a strong identity independant from other regions of Québec… not to mention the number of hockey players which come from the region).