Télé-Québec (Québec’s public television broadcaster, but perhaps only in fourth of fifth place in terms of ratings among non-specialty channels) is currently undergoing a round of budget cuts.

Last September, they launched Saturday Night Live Québec (SNL Québec).  The novice comedians of the new series became instant stars and household names across Québec and Francophone Canada.   They have since forged a high-profile media presence for themselves on talk shows, at comedy festivals, and in television and media in general.  In a nutshell, SNL Québec allowed us to view the making of new TV stars (and boy, have they been high-profile the last few months).

However, the nature of Télé-Québec’s cutbacks have finally hit home, and they had to cancel SNL Québec.   Last night’s airing could very well have been the LAST episode ever made.

For the moment, you can still view prior SNL episodes on Télé-Québec’s website, here:  http://snlquebec.telequebec.tv/emissions

I’ve seen it mentioned in the media a few times that Télé-Québec is trying to sell the program to a different network- but only time will tell if they succeed.

Regardless of whether or not another network buys the show, the following TV stars have been born and are taking new roles across all media platforms:

The show may have come to an abrupt end, but I have a feeling these six individuals will continue to be highly visible for many years to come.

Did you happen to guess the answer and cultural context for the last post?

If you missed the last post, click here to see the hilarious advertisement with half of “Dong”:

The answer to the last post is “Ding et Dong”.

Perhaps you recall I mentioned in the post on Elvis Gratton that Québec had a couple of close equivalents to Anglophone culture’s Cheech & Chong, with Elvis Gratton being one of them (the on-screen component), and Ding et Dong being the other (the stage comedy component).

Ding et Dong were a very popular comedy duo from the 1980s.  But as you can see from the last post, people are still talking about Ding et Dong — to the point that we still see very regular pop-cultural references to them, such as in the advertisement which was the subject of the last post.

With time, Ding & Dong have become pillars in Québec’s cultural psyche.  In this sense, they mean much more to Québécois culture than mere comedians.

Ding et Dong was a stand-up comedy duo, played by Serge Thériault and Claude Meunier.   They came as an inseparable pair.

This inseparability was also the metaphor for the punchline of the jokes in the advertisement in the last post.  The advertisement in the last post was from the Testicular Cancer Society, warning men to be vigilant and have regular health checks, otherwise, you may lose half of the “pair”.  (In Anglophone North American culture, it could be as if the Breast Cancer Society made an advertisement stating “Thelma and ________” in order to entice women to seek regular check-ups).

As a pair, they (Thériault & Meunier, that is) spun off acts which later created some of the greatest successes in Québécois comedic and pop-culture history – most notably, the sitcom series La Petite Vie (the most successful sitcom in the history of Canadian and Québec television) and the “Les Boys” movies (again among the most successful movies in history of Canadian and Québec cinema).

I was quite young when Ding et Dong were in their hayday, but I still recall bits & pieces of their acts from when I was a child.  As I grew older, many of their punch lines became part of everyday vocabulary and jokes between friends.

Claude Meunier and Serge Thériault have reunied on the odd occasion over the years, and have brought Ding et Dong back to life for special one-off shows.  We may see some more of these rare stage-reunions in the coming years — and I guarantee you they will be the hottest tickets in all of Canada the moment any such show is announced!

Anyway, I’ll leave it there for now — I have to drive right now from Toronto up to Témiscamingue on the Québec-Ontario border for some work-related business (that might make for interesting post in itself).   But I can already see some potential posts on the horizon relating to Les Boys, Claude Meunier, and Serge Thériault.

Have a great start to your week !

This is the last of the posts in the “Martins” series.

Martin Petit’s career path is not unlike those of the “Martins” in the two previous posts; Maxim Martin and Martin Matte.

Petit’s first big breaks into the public arena were through improve in the 1980s, and as a member of a comedy troupe and at the Juste pour rire (Just for Laughs) festival in the 1990s.  His participation at some of the best known comedy festivals was much more high profile than most comedians – eventually allowing him to take the reins as master of ceremonies.

In the early 2000s, he made the leap to high-profile radio.  The mid-2000s saw him host his own morning radio shows.  Later he was given the opportunity to host one of the most popular radio shows in Montréal, “Le monde est Petit” (“The World is Small”, a play on his surname) on NRJ.

Petit’s radio-presence made him a household name, and added to the furor and high-ticket sales for his one-man comedy shows.  He became a “must-have” figure for various events, and he became a host for Radio-Canada’s annual gala, with 1.5 million viewers.

He embarked in acting with his role in the very successful film Les Boys 2.  His acting career continued as a cast member of the very popular TV show, Un gars, une fille.

He was a co-writer of Montréwood’s most successful movie in 2011 (in terms of box office sales), Starbuck.

He currently has his own sitcom television show, Les pêcheurs; one of the better-known weekly TV shows in Québec.

Martin Petit’s official website is http://www.martinpetit.com/ (with ticket information for his upcoming shows).

The website for the TV show, Les pêcheurs is http://lespecheurs.radio-canada.ca/emission-infos/

Martin Matte’s own career is not unlike that of the other two celebrities in this “Three Martins” blog-post series.

However, of all the three Martins, Martin Mattes’ career has perhaps seen the biggest success.   He has been one of the most high-profile, highly sought after celebrities of the last couple of years in Montréwood.   For the sake of comparisons, in terms of his celebrity status (if I were to compare him to other celebrities in the same age bracket), his star power perhaps is to Montréwood what Matt Damon’s would be to Hollywood (although their career paths and focus are very different).

Martin Matte’s background was stand-up comedy, from which he launched his career in the 1990s — and which he still occasionally does (he was one of Québec’s most successful comedians of the 2000’s).   But since then, he has gone on to become a very successfully sitcom actor and charity activist.

His longest sitcom career was on Caméra Café for 4 years (until 2006).

He now is the main actor in the very successful sitcom, Les Beaux Malaises on TVA.

Considering how famous he is, I find it surprising he has not done much acting in movies.  He has done one movie, however – Nitro, in 2007

A short, comical scene from the sitcom Les Beaux Malaises on TVA’s YouTube channel can be viewed here:  https://www.youtube.com/watch?v=lfXLtUJpoPg

One of the main reason he has become quite popular is because of his regular television appearances.  It is difficult to not see him, almost on a daily basis, somewhere on Montréwood television.  He is regularly on the most popular talk shows (for example, I think he has probably been on Tout le monde en parle more than most semi-regular guests).  He’s often seen in television advertisements and he’s usually front and centre in television gala events, as well as a regular on morning and daily variety shows.

Regardless of where you are in anglophone Canada, If you’re just starting to watch Francophone television, Martin Matte is a must-know in order to help sort out the “who’s who” in your mind.

The official website of his charity foundation is here: http://www.fondationmartinmatte.com/.

I’ll keep this one short since I’m doing the Montréal-Toronto trip today on the highway (I’m actually quickly writing this post from an OnRoute roadstop on the 401).

Originally Franco-Manitobain from Manitoba, Maxim Martin made his entry into Québec’s pop-culture with a big leap from doing comedy gigs in Winnipeg to doing comedy at the Juste pour Rire festival in the 1990s.  Québec has since been his home.

Considering how well known Maxim Martin is, he’s not controversial or extreme in any sense.   But there are some notable things about him.

His love-life has occasionally been the subject of tabloids and talk shows, and he doesn’t shy away from it in his own media appearances or comedy acts.  For many years, he has been a single father.

He regularly talks about his adolescent daughter, Livia, in his comedy acts and on other media platforms – and he she has appeared in television herself.  Apparently she has a twitter feed which has garnered a lot of attention.

Although he’s a comedian at heart, Martin has been a radio host on one of Montréal’s most popular radio stations, he has been the co-host of a morning television bric-a-brac show, he has hosted regular sports slots on TVA Sports (he’s a big sports fan, and he has reported quite a bit on junior hockey leagues), and he’s also an actor.

Two recent films in which Martin has starred are the thriller films Manigances (2012 & 2013). 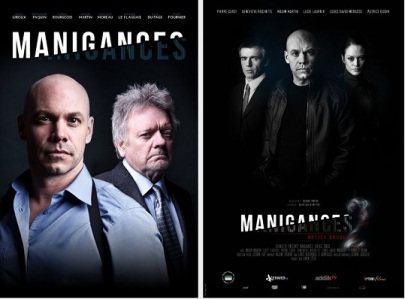 One thing worth mentioning is that he is one of the “greener” pop-culture stars on environmental issues.   His website even features elements on his thoughts on the idea, and the David Suzuki Foundation once did an online feature of Martin.  Maxim Martin at one point hosted an environmental program on the Canal Vox television station.

After a 2-year stage comedy absence, he came roaring back this week with sold-out shows at Théatre St-Denis in Montréal.  Just to give you an idea how popular he is, I tried for two days to get tickets in Montréal, without success, owing to how much demande there was for tickets (I guess it really was the show to see!).   Oh well… next trip.  Back to Toronto now.

His official website (with his blog, performance info & other) is www.maximmartin.com