You may remember the post entitled Examples of Stereotypes France has of Québec, and vice-versa (#141) from back in January 2015.

That post has been quite popular.  I receive daily stats for my blog, and there has rarely been a day which has gone by in which it has not been read by at least someone in Canada, Québec or France.

Stereotypes are always a popular topic.  There are many types of stereotypes.  Some are played upon in not a nice light, but others are generally harmless and are played upon for the fun (and most people take them as such).

One such stereotype which falls into the latter (harmless) category — at lease more or less — has to do with an advertisement by a French company.   And, boy, has it been getting a good deal of attention in Québec, both by word-of-mouth and online in Québec’s social networks.

Orange is a major cell phone company in France.

They put out an advertisement in France in which a customer approaches an Orange representative because he lost his cell-phone.  However, the customer speaks with what is “presumably” a Québécois accent (although he’s a little off from nailing it). 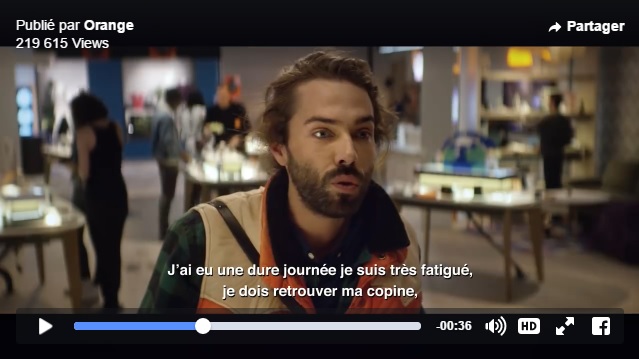 Is this grounds for controversy?

If someone were to ask me this, I would say “NO“.

Everyone knows the context, and I fail to see a “negative” context.

Granted, for someone in France who has never had contact with someone in Québec, it may lead them to incorrectly believe they would not be able to understand someone from Québec, but I doubt many people would view it as such.

Regardless, a good number of people on Québec’s social networks took offense to this advertisement, particularly in their vehement criticism that the accent and “vocabulary” is “off”.

My response to those few people in Québec who are complaining:

Don’t get your shorts in a knot.

How do you even know it’s even “Québécois” French?  Sheesh!

Perhaps it’s “Ontarien” French or “Prairien” French – You’re not the only ones who exist, so get over yourselves.