It falls under the umbrella of CBC – Radio-Canada, but it does not broadcast within Canada.  Rather it broadcasts to all corners of the globe.   It seeks to tell Canada’s story to the world.

This also includes many stories pertaining to Québec and Canada’s overall Francophone nature.

Here is one such story… The story of the Francophone village of “Debden“, North of Prince Albert in Northern Saskatchewan.

I’m providing this report to you because Canada’s Francophone communities outside of Québec often share many cultural traits and realities with communities within Québec – which, together, weave Canada’s overall Francophone nature into one pattern from coast-to-coast.

If you are working to improve your French, the following report is spoken in international, standardized French, albeit with our own homegrown accent.  The speed and accent in the report should be relatively conducive for language learners (one of the main reasons I chose to present you with this particular report).

Click the following link to listen to the 10 minute report from Radio Canada International:

As an aside, I added a little bit of information about Debden and its particular French accent in the post on Prairie & Western Canada French Accents (click the link).

(Video Below:  John Arcand is quite a famous Francophone fiddler from Debden.  This is one of his songs) 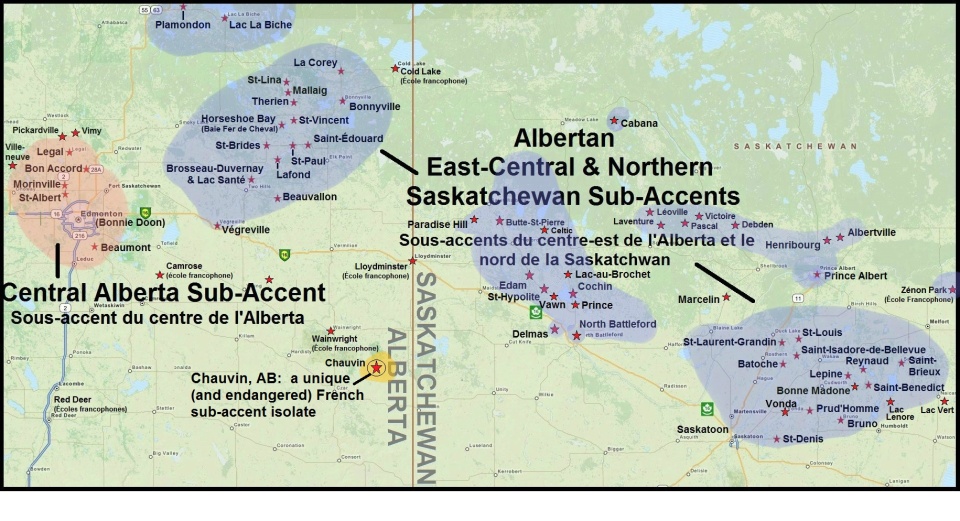 A map of the French accent zone in which Debden is situated (You’ll see it on the right hand side of the map, near the top of the highlighted towns, a 2:00 hour drive straight North of Saskatoon)