Stephen Harper hardly ever (ie: almost never) gives radio interviews to populist radio stations – unless he is sure that he will be on “relatively” safe ground.

One such station to which he just gave an interview is Radio-X.   Also known as CHOI FM, it is a French-language station from Québec City.

I personally listen to Radio-X quite a lot (this is one of the stations I regularly have on in the background at home or when doing work at my computer – among some other stations I listen to in both English and French).

Why?  Because it makes me think (whether I agree or not about what is being said), and it exercises my brain.  They sometimes say things I do not necessarily agree with (and I just shake my head when that happens), but other times they do.

I have a streak of everything inside me; left, right, up, down, in, out, and every place in between – which makes it so I enjoy listening to the whole gamut of views.

Populist radio stations also reflect popular views of the public – and it is extremely important to understand the public which surrounds you, especially when that public is comprised of your own compatriots and is also making decisions relevant to all of us (regardless if their views are the same or different).  We’re all in this together.

Radio-X has a little bit of everything for me in that sense — and obviously many other people also agree with me (otherwise it would not be one of the top-rated radio stations in Québec outside of the Montréal region).

You can listen to the Harper interview below.

Do not worry if your French is no higher than an upper-elementary level — Harper’s is not either.  Also, his heavy Anglophone accent would make him easier to understand for Anglophones versus listening to Francophones.

Sometimes online Radio-X interviews are only available online for one week… so act fast if you wish to hear the interview. 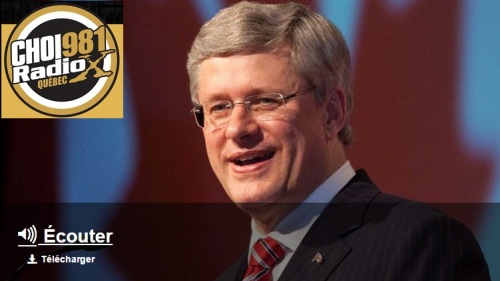 And yes, Harper made headlines in Québec with this interview — particularly with his statement that Radio-Canada’s woes are due to its own falling ratings and lack of appealing programming (versus Federal budget funding cuts).

Is there some truth to that?  Perhaps to a certain extent.

But… I do not believe that his statement is wholly accurate.   It is a complex subject, and funding cuts do not necessarily help CBC-Radio-Canada to “find their way” in a rapidly changing broadcasting world which harbours armies of new competition online, and in which cut-back reprieves could assist them to find stable ground in that changing world – even if temporary or for a few years.

His statement also does not take into account the mandate of CBC/Radio-Canada, and how the organization is supposed to be different from other networks (in the context of content, not popularity).

But would Harper dare make such a categorical statement in English about the CBC? (Radio-Canada’s English counterpart).   I doubt it.

By Quebec Culture Blog 101 in Uncategorized on September 29, 2015.
← A well-made BBC video questioning if Québec is able to integrate the Anglophone immigrants it “needs” (#363) Québec’s Squeegee Kids (#365) →