I’ll take that post and modify it slightly to reflect our realities (plural) here.

This is the Thanksgiving long weekend in Canada & Québec.  In Canada, we always have our Thanksgiving the second Monday of every October, rather than the last Thursday in November (the US holiday).  But it wasn’t always like this, and even today Thanksgiving is celebrated differently in Anglophone Canada and Francophone Canada.

In French, Thanksgiving is “l’Action de grâce(s)” (it’s acceptable to spell it with or without an “s” at the end).

Originally, in Greek times, there were Pegan traditions which offered thanks to the gods.  These traditions lasted for hundreds of years.  As Europe Christianized, the tradition of giving thanks for specific events or dates continued, but this time in a Christian context, through prayer and celebration.  The reasons for Thanksgiving could be anything, and it could be held anytime (upon the winning of a battle, conquering an illness, or a bountiful harvest – essential for survival).

The first Thanksgiving in North America was when the English explorer, Martin Frobisher, held a ceremony to give thanks for the survival of his explorations in 1578.  It was held in Newfoundland.

The second Thanksgiving was when French explorer (and founder of New France), Samuel de Champlain, gave thanks for the survival of his explorations in 1606.  It was held on Île-Royale, present day Cape-Breton, Nova Scotia.

As commemoration of his ceremony of thanks, Champlain founded the “Order of Good Cheer” (l’Ordre de bon temps), which has been reconstituted by the Nova Scotian provincial government – and thus which can continue to receive recipients today.

It could be the oldest order in North America. 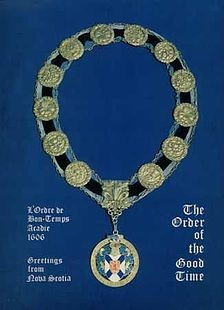 In 1621, Pilgrim settlers founded the Plymouth colony and gave thanks for their success.  They celebrated with the bounty of their harvest, and a Turkey came to symbolize the celebration.   This “Turkey tradition” took hold in the New England colonies of the time.

It is quite possible there were other Thanksgiving celebrations in New France, between 1606 and 1621 (owing to the fact that there was already an Order established around it).  However we may never know for sure, since Thanksgivings always coincided with an event — giving rise to suddenly call a ceremony of thanks — rather than being cemented in specific dates.

Thanksgiving ceremonies were also held post-1621 in all parts of British North America (both in what is now the United States and Canada), as well as New France, all with a religious connotation, all related to an event warranting thanks, but the specific “Turkey tradition” still remained in the New England regions and other regions which would become the USA.

During the American revolution, the shores of Lake Ontario in Upper Canada (present day Ontario), and the Eastern Townships of Québec received a massive influx of “Loyalists” who did not wish to succeed from the British Empire.  They brought with them the Turkey tradition from what was quickly becoming the United States.

Gradually, with time, their tradition of incorporating a Turkey meal into the already existing Thanksgiving ceremonies of Anglophone Canada had begun to spread.

But owing to the the French / English language lines, but probably more owing to the Protestant / Catholic religious lines (remember that Thanksgiving was still primarily a religious ceremony), the Turkey Tradition was not incorporated into the Francophone Thanksgiving celebrations in Canada — rather it remained very much a church-based celebration of prayer in Francophone Canada.

Thanksgiving continued to be held in Canada whenever thanks was called for, until 1879 when Parliament in Ottawa declared it a National holiday (essentially “nationalizing” it, and taking the decision on when to hold it out of the hands of Church and family).  It was not held every year, but was held when called for by Parliament.   However, the traditional ways of celebrating it (Turkey & harvest-based for Anglophones, and Church service-based for Francophones) was maintained.

After World War I, it was declared by Parliament as a type of Remembrance Day, celebrated every November 11th (the precursor to Canada’s modern Remembrance Day).

In 1931, Parliament separated the traditional Thanksgiving from the need for a lone Remembrance Day, and in 1951 Parliament degreed that the traditional Thanksgiving holiday would be held the 2nd Monday of October (the date it is celebrated today).   This day was chosen owing to the fact that thanks had become synonymous with a bountiful harvest (rather than a religious event), and Canada’s harvest generally was finalized by the second week of October.

The 1950s and 1960s saw a major secularization movement across Canada.  For Anglophones, Thanksgiving had been, for many generations, a more-or-less secular affair not affiliated with the Church.  It was celebrated with feasts and Turkey, and had already made the leap from Church to home.  Thus secularization’s impact on the festival did not have a major effect in altering it for Anglophone Canadians.

However, the secularization movement of the 1950s and1960s had the effect of pretty much wiping Thanksgiving off the map in Francophone Canada.  It was religious matter, celebrated in church.  When Francophone society secularized, people stopped going to church and the celebration disappeared.

Francophones did not have the (Loyalist) Turkey Celebrations on which to fall back on.  To this very day, Thanksgiving is considered by most people in Québec simply as a statutory holiday – a day off from work to be filled with other activities like travel or leisure.

I know a number of people in Québec who, in fact, have never even eaten a Turkey once in their lives – it depends on the region of Québec and the family.  Sometimes Turkey at Christmas, for some families at least, is supplanted by other dishes such as Francophone Canada’s traditional meatball stew and other Francophone Christmas dishes).

I know one person in Québec who decided to go out on a limb and try to make a Thanksgiving supper for the first time (out came the recipe book).  But apparently the attempt failed miserably, the meal was terrible, and she’ll never try it again.   But you can’t fault her for trying.  😉

So with that, to everyone across the country, I wish you a wonderful and Happy Thanksgiving !!

By Quebec Culture Blog 101 in Uncategorized on October 12, 2015.
← The party leaders’ final major interviews before the election (#373) More France / Québec dynamics, and plays on stereotypes (#375) →