As usual, we have seen a lot of mud-slingning attack-ads in this election campaign.  It is par for the course.

Nobody should harbour wishful thinking that there will ever be election campaigns without them.  Therefore, when we do see them, we should simply laugh them off.

However, I will say that it is very nice – very very nice – to find those few ads (regardless of the party) which do not throw mud or attack another “person / candidate / party”.

One of my favourite such ads comes from Laval, Québec.

Laval is Québec’s second largest city after Montréal (it is larger in population that Québec City).  Laval is to Montréal what Surrey would be to Vancouver or what Mississauga would be to Toronto (complete with it’s own downtown core and increasingly separate identity from the larger city which it butts up against).

The greater Montréal region is comprised of a number of cities dispersed on islands in the St-Lawrence River, and on the mainland around those islands.  Both Montréal City and Laval are their own islands (below, openwiki photo credit Jeangagnon). 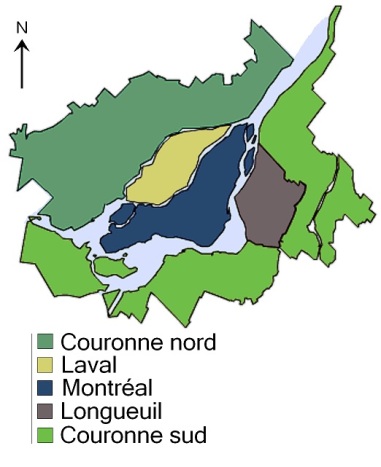 There is one candidate in Laval who put out one of the most brilliant — and good spirited — advertisements of the entire election campaign.

It was so brilliant in fact, that it is the one advertisement which sticks out in my mind against all the rest, and has since become my favourite ad of the entire campaign.

Before showing you the advertisement let me give you a backgrounder.

Unfortunately, because of one’s own background experiences and because of how human brains work, people often make judgments about strangers based on skin colour, clothing, what that stranger may be in the act of doing the moment we first set eyes on them, and accents.

(A few posts ago, I even talked about my own prejudices which I held against Québec’s Squeegee kids — until I found out about the stories behind the faces and clothes of those asking for money to squeegee my window:  Québec’s Squeegee Kids (#365))

During my 13 year absence from Canada, I myself have lived and worked in China, India, Lebanon, Ghana and Syria.

Believe me when I tell you that accents make a difference in how people judge you.  In the above countries, I have used other languages to speak to local citizens over the phone.  Often I was judged and treated differently because of my accent, sometimes not in the a good sense.

In addition, I have been treated different because of the colour of my skin, and again, sometimes not in a good sense (in some places, being white can lead you to be treated negatively).

Such assumptions and questions based on “surface characteristics” can sometimes build walls.  They can send a message which subconsciously says “I’m asking you questions because you are different from me, you are not one of us, and you must be an outsider whose origin I need to identify so I can squarely label “how” you are not one of us”.

I can tell you that such walls can be uncomfortable in certain circumstances – especially when you have adopted you new city, province or country as home (and especially when you feel you are one with your new home, just as anyone born there would feel).

First, I want you to consider this to be an a-political post. It is not an endorsement of any one candidate or party – but it does show us the good in society when a candidate (regardless of the party) portrays messages which should matter.

One Conservative candidate, Roland Dick, in Western Laval has obviously felt he has come up against the same walls I described above.

I am not going to mention what country Roland Dick was born in.  That is not relevant.  But he does have a very heavy foreign accent when he speaks French, and he might be considered by some as being a visible minority.

He has put out an amazing advertisement which seeks to tear down these walls, and sends a message to people to look beyond what they physically see or hear.  He asks them to discover the candidate himself.

In the advertisement, he tells us that he most often is asked about his “personal details” because people wish to place him in a “category” (imagine how that must feel if such questions are among the most asked questions he receives has he knocks on doors while campaigning).

He then goes on to describe how he has worked his butt off for his city (Laval) for more than 25 years through his volunteer work, how he has won national awards for his community work, how he has volunteered for the downtrodden, how he is proud to have graduated from a local university, how he tries to make a difference to his city, and how he is just as proud of his family as you would be of yours.

In Roland Dick’s advertisement, he tries to tear down a different type of Two Solitudes.  My hat goes off to him.

Makes you think, doesn’t it?

Here is the ad.

As a point of camparison, contrast the above with mud-slinging advertisements which directly attack other politicians or parties.

Sure, they may make us laugh for a moment (how often do you get to hear Justin say “OW!”).

But what is the substance in hearing Justin say “OW!”, and what does that say about the person making him say “OW!”.

In my books, any person who makes another person say “Ouch!” is a word spelled

Would you vote for a haughty-like bully?

Here’s that “other” ad (and to think that he actually called Justin’s escalator ad “ridiculous”? — Serious dude?!).