People are still talking about the Gémeaux awards (the subject of the last post).

Usually the Gémeaux awards is an event which comes and goes in the same night, and then nobody gives it any thought until the following year.

But this years’ Gémeaux seems a little different – and I wonder if it is morphing as a new focus on Québec’s cultural scene in general.

A few things which have captured the public’s attention:

Below is an earlier video of the two of them seemingly getting a little smashed, tipsy and a little loose-lipped (??) together on TV…

Here is a cultural difference between Anglophone and Francophone Canada if I’ve ever seen one:

How many shooters of Smirnoff Vodka did you count them down during the taping of the episode???

Despite francophone and anglophone TV sharing the same CRTC with the same TV rules, I often get the feeling francophone TV can – and does – get a away with waaaaay more on air, including on-air drinking and profanity… 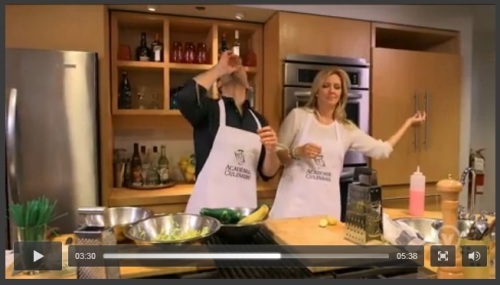 If you’re wondering what the heck crazy-ass show this is, it is called “Les recettes Pompettes” (Translation:  “Recipes with a Buzz”) with Éric Salvail as the host.

His job is to basically get every celebrity in Québec (minus Celine Dion) as drunk as a skunk… and I suppose perhaps make food while they’re at it — if they can still see clearly by the time it’s ready to put in the oven).

It airs on “V” television station.  The show’s website is http://vtele.ca/emissions/les-recettes-pompettes/

Politics and entertainment is never a good mix… And the cameras are bringing this mix straight to us on our screens – right in our faces, right in our homes.

With all of Québec’s cultural who’s who finally reunited at the Gémeaux awards for the first time in 10 years, I have a feeling that this event will continue to grow as a cultural (and perhaps off-stage controversial) highlight in Québec’s annual calendar.