It’s a Francophone holiday tradition in Québec and for Francophones elsewhere in Canada to have Ragoût de Boulettes as one of the main dishes at Christmas. 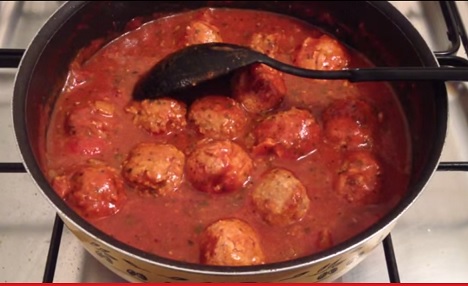 There are different ways to make it, and each family seems to have their own recipes.  I’ve seen it made with only pork, or with only beef, or with a combination of poultry and pork, as well as with dark brown sauces, lighter dark sauces, white flour sauces, not spicy and meaty, or a even a bit spicy.   It’s even eaten as far south as Louisiana, where it can be quite spicy, ragoût cajun de boulettes.   Making it can be quite a big process – it can take hours to let it simmer.

But yesterday, I had a bit of an interesting experience with ragoût de boulettes.

These trips back to Alberta are always super busy…  If I’m not doing things with friends and family here in Vegreville, I’m usually running back-and-forth to Edmonton every day or every second day to see friends or family in and around Edmonton (even though the Vegreville-Edmonton drive is 110km each way).  And then there’s the 6.5 hour drive to Moose Jaw, Saskatchewan, which I usually try to sneak in for a quick two or three day visit to see my grandparents and extended family.  And then there’s the 5 hour drive down to Calgary and a couple more hours’ drive into the Rockies which I’m doing with visiting friends from Ontario!  Phew!  Need to find time to breath (and fill the tank at the very least!)

Needless to say, the holiday season always sees me doing a lot of driving.

Yesterday I made the drive into Edmonton to see my best friend.  His mother is Franco-Albertaine, and they always had the traditional Ragoût de Boulettes for Christmas.

Since I was stopping at a well-known warhouse-style supermarket chain on the edge of Edmonton on my drive in to see him, I phoned and asked if he wanted me to pick up anything for him, such as ground pork, etc.  He said “Absolutely not!  There’s absolutely no way i can use supermarket-processed meat in the recipe… it can only be fresh local meat, fed by local farmers, with nothing added”   I was kind of surprised.  I asked him what the difference was… and he simply answered “I’ll show you when you get here.”

(Coincidentally, while I was in the supermarket, I overheard two couples inside chatting in French with a Falher accent — an accent of the Francophone region of Alberta around Peace River in the Northwest of the province.  You’ll recall I mentioned this accent in the accent series.  Since it’s rare to hear a Falher French accent in the Edmonton area (versus a central-Alberta French accent), I eavesdropped for a couple of moments while in line [bad me].  Both couples were in Edmonton to spend the holidays with family who moved from Falher, and they randomly bumped into each other at the supermarket.  Hey, I know eavesdropping is bad… but the many different accents in Canadian French have always fascinated me).

Anyway… no sooner had I got my best friend’s house, than he said “let’s go”, and we hopped in his truck to go to the butcher shop. 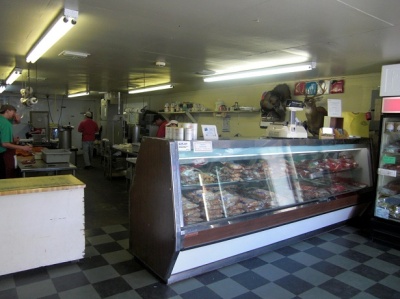 He said his family’s ragoût de boulette goes back generations, and the taste has to be EXACTLY how is tasted many generations before — before supermarkets even existed — or it wouldn’t be right.  That was an interesting statement, so I asked him what he meant (and even though I’ve known him for many years, I never really knew about the specifics of his ancestor’s roots, going back several generations).  Like many Franco-Albertain families, his great-great-grandparents came to Alberta from other regions of North America.  For example, here in Vegreville, the original families (who are still here), such as the Tétreau, Houle, Poulin, and Létourneau, came to Alberta from Kansas (at that time, 130 years ago, there were still many Franco-Americains in the US, and a good number were re-congregating and settling Alberta).  Others came from Eastern Canada (particularly Ontario and Québec).   My buddy’s great-great-grandparent’s family were actually Franco-Ontariens who settled the region Northeast of Edmonton – eventually forming part of Alberta’s Franco-albertain heritage.

He said the ragoût de boulettes recipe his family still makes goes back to their original Ontarian roots (Francophones have been in Ontario for 400 years, even before Anglophone culture in Ontario).  My buddy says the recipe his family uses has remained essentially unchanged for many many generations… with each generation trying to make it as true-to-the-original as they can.

He refuses to make his family’s Christmas ragoût with supermarket meat.  He says supermarkets use additives and “gas” the meat to make it last longer (just as supermarket wholesalers “gas” bananas so they keep longer).  But this treatment alters the taste, and adds a slight “ammonia” taste to it.  I had never heard of this with meat (but I had for bananas).

Anyway, he checked up on his special lean-lean ground pork order at the butcher, ensuring everything was going to be delivered to him on time.  His extended family is quite large, and they’re going to be travelling from all over Alberta tomorrow to meet in Medicine Hat.  Everyone in the family has been assigned a different dish to make, and my buddy was assigned the all-important ragoût de boullettes this year… so he can’t mess it up.   I tagged along as we drove around the city to look for containers big enough to put it in for his 6.5 hour drive down to Medicine Hat.  He has a long day of cooking ahead of him today.

The next post I’ll talk about what things are eaten in Québec (and Francophone families in general across Canada) for Christmas.   Tomorrow, the 24th, is a big day on the calendar for Francophones and food!  Will see you tomorrow.