French Immersion across Canada – Some maps (#163)

I was quite curious just how many “communities” (incorporated towns & cities) across Canada, but outside of Québec, were offering French Immersion programs.  In other words, I was curious how many towns and cities exist across Canada in which Anglophone Canadians can complete their entire Kindergarden to Grade 12 education, completely in French, all within local schools.

I did a bit of research online and made a few phone calls, but I was not able to find a “national” list so-to-speak.   Nor was I able to find a complete list for five of the provinces; Newfoundland, Nova Scotia, New Brunswick, PEI and Saskatchewan.   For those five provinces, I would have to sift through every single school board’s website to find to find all the individual towns and cities offering French immersion.   I took a brief look, but there were so many that it would take me a week or more.

After I obtained the lists, I collated them into an excel document which I uploaded to Google Maps, and the results were astounding.  Have a look for yourself below.  Each dot represents an incorporated town or city offering French Immersion.  In many cases, there is more than one school in each town (therefore, one dot can represent upwards of 2, 4, or more different French immersion schools).   The one lone dot for Toronto represents more than 40 different schools alone.   In just these four provinces, there were 984 Immersion programs.  It makes you wonder how many different programs, towns and cities there are in total across Canada if you factor in all 10 provinces and 3 territories.

I’m amazed at the change which has occurred across the country on the language education front over the last 20 years (and the demand for French from ordinary Anglophone parents which is driving this change) – wow! 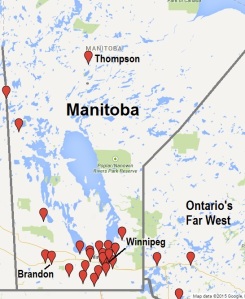 Ontario’s portrait becomes even more amazing when you narrow in on Southern Ontario’s towns and cities.  It makes you wonder which parts of Ontario do not offer kindergarten to grade 12 education all in French? – click to enlarge.

It’s unfortunate government bodies for the remaining provinces do not provide publicly available lists (and instead requested me to me to check in with each school division).   But from what I saw when I started browsing individual school division websites, a similar portrait exists in all the other provinces too.

Well… I guess that question is answered!  🙂

A French Language Curriculum Consultant from PEI wrote to me and provided me with the communities in PEI.   She also mentioned that 21% of PEI’s entire student body is enrolled in French Immersion.  Those are astounding numbers!

Here is the map (thanks very much Deneen!)