“UNIS” (which means “United” in French) is Canada’s newest French-langauge television station – and boy is it different.

Their catch-phrase is Tout franco, tout beau (Everything Franco, Everything great)

Until the introduction of UNIS, our French-language television has

The moment it went on air in September, 2014, UNIS instantly shook up this mix in numerous ways.   With its main production studios based out of Toronto (Ontario), it broadcasts a wide variety of programming of interest to Francophones and Francophiles across Canada.  Its approach is from the perspective of producing and presenting its programming to an audience of one Francophone family/country, from Victoria, BC to St. John’s Newfoundland, and everywhere in between.

Before UNIS’s introduction, we could easily get the the impression that each of Canada’s various Francophone societies were often introspective, and did not mix much among themselves.  But UNIS breaks down these artificial mindsets and self-imposed borders in one-fell-swoop.  UNIS allows us to see that we are all part of one giant Francophone / Francophile society, family and country.  Our issues, ways of life, pass-times, interests, joys, and concerns are shared in every corner of the country.

In one day’s programming, you will hear a multitude of different French accents, reflecting the regions where each day’s programming was filmed.  We have never before seen something like this in Canada.  It’s allowing Canada and Canada’s Francophones / Francophiles to view themselves differently, and as something much bigger.

What I particularly appreciate, as I am sure do many others, is that we see how Anglophones across Canada have also become bilingual over the past couple of decades.  When filming various programs across the country, it is inevitable that Anglophones will be involved in telling the various programs’ stories on air.  We are able to hear and see bilingual Anglophones across the land, even in the most remote corners of the country.  My personal guess is that many are the products of Canada’s successful French immersion programs.   Again, before now, we have never seen anything like this on Canadian television.   I have a feeling it will give more than a few people a different perspective on what Canada is all about.

UNIS is rated as a CRTC Category A station.  This means that it has to be included (by law) in everyone’s basic cable bundle across Canada.  If you do not receive it in your television package (even if you are in the furthest reaches of the Arctic), then contact your cable-distributor.  It is supposed to be included, regardless of what package you have or where you live.

I personally believe that UNIS has the potential to morph into a much more powerful programming medium.   It is still very young, and their programming has yet to evolve.  But I have a feeling that it may become a very influential television station as additional programs and divisions are added with time.  In that sense, it could have the ability to help shape the country’s view of itself over the next several years and decades.   Time will tell where it all will go, but I have a good feeling about it.

Some of my preferred programs include:

Couleurs locales – (Local Colours): Every week Frédéric Choinière hosts of panel of columnists and engaged members of society in the studio to discuss what is happening in the four corners of the country.  Topics are of interest to Canada’s current events as a whole.  Matters are often approached from the perspective of Francophones and Francophiles who live in all of Canada’s provinces and territories.  In addition to the regularly featured panel, the show also features a guest (usually an influencial / well-known individual) to give their perspective on matters related to Canada’s Francophonie. 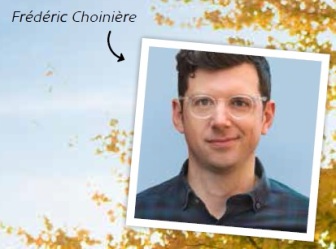 Ma caravan au Canada – (Driving my camper across Canada):  The duo Vincent Graton and Damien Robitaille, take their camper on the road and drive everywhere throughout Canada.   They stop in communities and at lesser-known places of interest.  They meet people from all walks of life, and manage to find Francophones and bilingual Anglophones everywhere in Canada who are doing remarkable things, simply through living what they consider to be their normal lives.

Canada plus grand que nature – (Canada, Bigger than Nature!) :  The well-known celebrity actor, Patrick Hivon, explores Canada’s natural scenery, national and provincial parks, from coast-to-coast-to-coast.  He meets people who lives are closely tied to the land he explores (usually other Francophones and Francophiles, and bilingual Anglophones across Canada), and it’s a great way to see parts of the country we would not otherwise have a tendency to see.

J’habite ici – (This is Where I Live):  The show follows and learns about Franco-Ontarians going about their daily lives in the towns and cities where they live.  It gives us an intimate perspective into the homes of those who it shadows.  And more importantly, we learn about la belle vie of living in French in Ontario.  It is something quite special and unique.

Balade à Toronto – (Around Toronto):  When we think of Francophone musicians who leave their towns and cities around Canada to develop their musical talents in a more structured & professional environment, we usually think of people who head to Montréwood (Montréal’s music, film, TV and arts scene).  However a good number of Francophones are deciding to head to Toronto instead.  This show allows us to meet them, follow them, and simply enjoy what they have to offer us.  Shows like this truly let us see what great a place Toronto is to live in if you are a Francophone or Francophile, or just want to add something different in your life.

Elles pêchent – (And they fish!):  We’re all familiar with weekend fishing shows.  This one is a little different in the sense that it is hosted by two ladies who have a love of the sport.  These two women, Louise Laparé and Suzanne Beaudet are best friends and have been fishing together since the age of 18.   They take us to hidden rivers and lakes and let us into their lives and conversations as they engage in what has been called the world’s “most relaxing sport”.

Le goût du pays – (A taste of the country):  The celebrity Vincent Graton takes us across Canada to discover its regional culinary delights.  He meets local chefs and joins them when preparing their meals, in a natural outdoor setting – often using ingredients from the land and settings in which the program is filmed.

The official website for UNIS can be found here: http://unis.ca/

You can stream past programs here:  http://unis.ca/videos

Take the time to explore what UNIS has to offer.  When you consider that the station was quickly thrown together in the period of about a year, with limited funds, I think you will be impressed.